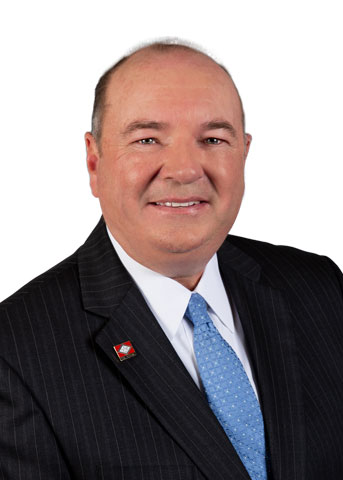 Bruce Maloch was born June 29, 1957, and grew up on the family farm near Emerson, Arkansas, where he still farms. In his early years, Maloch was active in 4-H and served as state president and national officer of the FFA.  He is a summa cum laude graduate from Southern Arkansas University with a B.B.A. in Business Agriculture and received a Juris Doctor degree with honors from the University of Arkansas at Little Rock School of Law. While at SAU, Bruce served as president of the Student Government Association and was recognized as the Outstanding Student in the College of Business. He later served as president of the SAU Alumni Association and was recognized with the Outstanding Young Alumni award in 1997.

Upon graduation from law school, Maloch returned to Columbia County and began practicing law. In 1986, he joined Farmers Bank & Trust Company where he currently serves as Vice-Chairman & General Counsel and is a member of the bank's board of directors.

Bruce has always been involved in community and governmental affairs. Bruce served ten years on the Columbia County Quorum Court. He has served as president of the Magnolia-Columbia County Chamber of Commerce, Columbia County Bar Association and the Group 4 Arkansas Bankers Association for Southwest Arkansas. He has been a member of the Magnolia Economic Development Corporation and the Magnolia Airport Commission. Maloch is a former chairman of the Arkansas FFA Foundation and Arkansas Cattlemen’s Foundation. He has long been active in Arkansas Farm Bureau activities and supporting agricultural youth activities. He is an auctioneer and donates his services for charitable events throughout the area including auctioning Jr. Livestock Sales for four counties.

Maloch was elected to the Arkansas House of Representatives in 2004, 2006 and 2008 and was elected to the Arkansas Senate in 2012. He was elected Chairman of the 37-member Freshman Caucus during his first House term and later served as House Chairman of the Joint Budget Committee during his final term.  As House Chair of the Joint Budget Committee, Bruce helped guide the legislature through its first ever Fiscal Session.  He currently serves as Chair of the Senate Rules Committee, Co-Chair of the Legislative Council PEER Committee and serves on the Revenue and Tax, Agriculture and Jt. Budget Committees. Maloch was recognized as Legislator of the Year by the Arkansas Realtors Association, Person of the Year by the Arkansas Municipal League and was named one of the top ten legislators by Talk Business magazine.

Bruce and his wife, Martha, live on a farm south of Magnolia where they raise registered Brangus cattle. Martha is a retired educator from the Emerson-Taylor School District. They have three children and five grandchildren who are also active in 4-H.  The Maloch's are members of First Baptist Church of Magnolia.

“Support for our rural hospitals, access to healthcare, improved transportation infrastructure and adequate broadband coverage are all critical to economic development efforts.”

Senator Bruce Maloch and his family have a legacy of service in FFA, on both the state and national levels. Senator Maloch served as state president, then as secretary on the National Officer team. All three of his children have followed his example of service and his granddaughter, Reese, is now a member of her local FFA chapter. Arkansas Farm Bureau profiles the family and why FFA has been so integral to their family.

Paid for by the Committee to Re-Elect Bruce Maloch